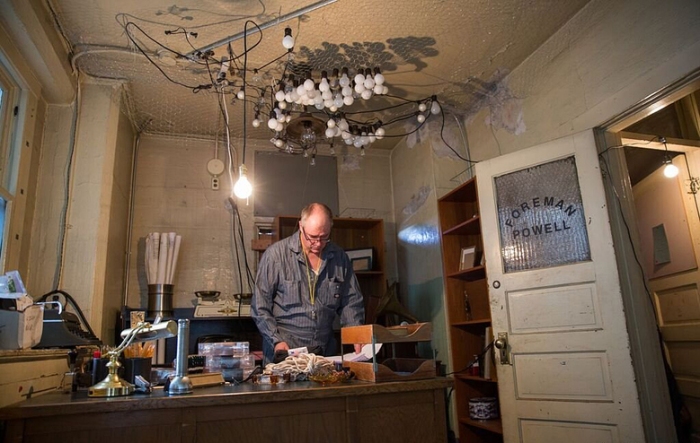 Walking into the Georgetown Steam Plant is like walking into an abandoned cathedral — if the god it was designed to celebrate was a Dickensian vision of 19th-century industrialism.

Built over a century ago, the plant is massive and awe-inspiring: tall concrete walls; towering turbines that dwarf any human walking around them; vertiginous metal catwalks; cobwebby staircases; an enormous, sooty coal-firing room that feels like an oversized crematorium.
When it was finished in 1907, the plant was a monument to the latest in electrical technology — but by the 1920s, new innovations had already made it obsolete. A small staff ghosted around the building for decades doing basic maintenance, greasing the gears and checking the gauges just in case the turbines needed to be fired up for an emergency.

Walking through the steam plant on a recent afternoon, it seemed like a combination of factory and crypt. But now, thanks to Seattle City Light environmental analyst Mike Aronowitz — who describes the plant as his “passion side-project” — it’s also becoming a theater.
For the past several weeks, local performance collective The Satori Group and an East Coast-based collective called ARTBARN have been occupying the plant, building an immersive work — in which the audience will move throughout the building, following characters inspired by those old maintenance workers, up those cobwebby staircases and across the vertiginous catwalks — titled “We Remain Prepared.” (The plant was decommissioned in the 1970s, but all the original equipment is still in place. “In theory,” Aronowitz said, “you could get it up and running again.”)

While walking through Georgetown, past bars, corner stores and brick buildings on the way to a rehearsal, Satori director Caitlin Sullivan said “We Remain Prepared” asks: “What happens when we invest so much in our labor? And does our labor actually buy us happiness? And if our labor doesn’t buy us happiness, how do you build meaning when you lose that — lose the things we’re supposed to believe in?”

That’s a question Satori has been chewing over for years, often in immersive-theater circumstances — even before the phrase “immersive theater” was popularized by “Sleep No More,” an interactive production inspired by “Macbeth,” which is staged in a New York City warehouse and, company representative Scott Braun says, has been selling out on a daily basis for around five years.

Satori’s “reWilding,” for example, invited audiences into a room designed like a forest glen to drink soup and beer while watching impressionistic scenes of people who’d fled the postindustrial world to forge a new (and oftentimes dysfunctional) community.

But “We Remain Prepared” is a kind of rejoinder to the impulse to flee — it’s about staying and continuing to work, even when the work feels useless.

“These characters could be diodes in a 30-year-old computer,” said actor Charles Leggett, who plays one of the steam-plant caretakers. “The play is about technology that still works but that nobody wants, like loving somebody who doesn’t love you back.”

“Prepared,” Sullivan said, explores the mental landscapes of “people who were inside that building for so long. What worlds would you invent when you lose input from the outside?”

The Georgetown Steam Plant was designed by Frank Gilbreth — Frank and his wife Lillian were legendary engineers who specialized in industrial “efficiency.” If you have an “island” in your kitchen, or a trash can with a lid that conveniently opens when you step on a pedal, you can thank Lillian for that: She and her notions of industrial efficiency are also characters in “We Remain Prepared.”

But Sullivan’s core question, and the core question in much of Satori’s work, is about relationships — how people relate to each other, and how groups of people (like a theater company) might relate to a space (like a century-old steam plant).

Directing theater is always about “assembling a community, naming its values, building a culture. The question of a performance is always how to invite an audience into that culture. I believe more and more that no matter what the work is, that’s the deal.”

Georgetown’s cathedral to industrialism — with the ghosts that haunt it — is ready for you to join its community.