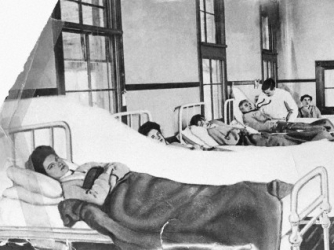 In her words: “I have been in fact a peep show for everybody. Even the interns had to come to see me and ask about the facts already known to the whole wide world. The tuberculosis men would say ‘There she is, the kidnapped woman.’ Dr. Park has had me illustrated in Chicago. I wonder how the said Dr. William H. Park would like to be insulted and put in the Journal and call him or his wife Typhoid William Park.”

From The New York American

“It’s like finding a goldfish in your milk. It doesn’t prove anything – but it’s mighty suspicious”

Bio: Mary Mallon, or more commonly known as “Typhoid Mary,” was the first known asymptomatic carrier of typhoid fever. As a teenager, Mallon immigrated to Mamaroneck, New York from Northern Ireland to live with her aunt and uncle. Soon after arriving stateside, Mallon began working as a cook for a wealthy family and, within a mere two weeks, the members of the family fell ill. Presumably to distance herself from this strange occurrence, Mallon moved to Manhattan in 1901. From 1901-1906, Mallon worked in the kitchens of seven different wealthy families, quitting each job after members of the household took ill. It wasn’t until 1907 that anyone connected the dots and saw the truth about Mallon: that she was likely responsible for the trail of typhoid spanning the Manhattan area.

When Mallon was first confronted by George Soper, a sanitary engineer investigating a typhoid outbreak on Long Island (where Mallon had been a cook), he demanded samples of her urine, blood, and feces. Mallon promptly grabbed a carving fork and chased Soper off. Mallon was eventually caught by health officials and tested for the bacteria, which we tested positive for. She was then quarantined on North Brother Island, in the East River, just off the Bronx. Though she sued for her freedom and tried to get justice for the 163 samples of her bodily fluids she was forced to give, Mallon wasn’t released until 1910, when she was forced to swear that she wouldn’t seek employment in a kitchen ever again. This agreement didn’t last for long.

In 1915, Mallon was apprehended by the health department once again when a maternity hospital was being investigated for a typhoid outbreak and she was found to be working in a hospital kitchen under the pseudonym Mary Brown. From that arrest, she was effectively sentenced to quarantine until death, living on North Brother Island for the next 23 years until she died in 1938.

Throughout her entire ordeal with the health department, and even with proof that her gallbladder was a breeding ground for the bacteria, Mallon maintained that she wasn’t a carried of the disease, which likely was the reason that she refused to comply with the hundreds of orders and requests for samples from the health department. This is complicated by the fact that legend has it that she wanted “Typhoid Mary” to be on her gravestone; this didn’t happen.

We can’t be sure exactly why Mallon was kept on the island for so long, but we do know that she was a working class, Irish woman, so it is likely that discrimination played a role in her forced captivity. The legacy of Typhoid Mary and quarantine lives on today as public officials still walk the fine line between looking out for public safety and maintaining the rights of the individual.